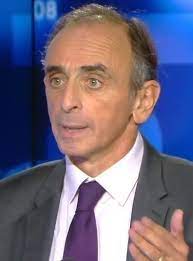 Whether Eric Zemmour announces his candidacy on December 5 at a major rally in Paris or not, he has already won the presidential elections. His tough talk defending his vision of France, its culture and history, what he calls a “civilizational battle” against “an immigrant invasion imposing a foreign civilisation on France,” has determined what the next president must promise he will do once elected.

The Left and Greens have been reduced to ashes where most hover between one and eight percent of voter intent, and Macron can do at best in the first round vote 23%.  The big question is will people vote this time? Zemmour may be the catalyst but he is a victim of his own success.

END_OF_DOCUMENT_TOKEN_TO_BE_REPLACED

If the government does nothing to stop “the disintegration” provoked by “Islamism and the hordes in the banlieue” then “tomorrow civil war will end the growing chaos, and the dead, for whom you carry the responsibility, will be counted in the thousands.”

That is the dire warning issued on April 13 and signed by some 1,300 retired Officers, including 23 generals, NCOs and other veterans of the French military. But it wasn’t until April 21 that the letter was made public by the conservative weekly Valeurs Actuelles. Since then, it has been a civil war of words between the left, the government and those on the right.

END_OF_DOCUMENT_TOKEN_TO_BE_REPLACED

Preamble: This is hard to write as it takes me to the limits of what is considered legal speech in many European countries, including the country of my residence: France. It is the result of a long discussion with a “Woke” young Euro-American activist woman.

First, it must be made clear that I know few Americans who have acted so boldly against America’s behavior and interference and wars of aggression around the world, or its treatment of minorities at home as I have. But I refuse to be Cancel-Cultured into remaining silent on the unacceptable by the Politically Correct.

END_OF_DOCUMENT_TOKEN_TO_BE_REPLACED

The Germans are a funny bunch. Germany is certainly Europe’s most successful nation and yet probably among the most stressed of its people. Just a few of my observations as we enter an uncertain 2020. Oh mein Gott!

Stuttgart– I must give credit where credit is due: the Germans listen to each other. I think this is in part because German grammar throws their verbs at the very end of every sentence which forces you to wait for the conclusion to know what they are really trying to say before you can yell back. For those who don’t understand German, it is easy to think they only discuss serious things which, in fact, is not necessarily wrong.

END_OF_DOCUMENT_TOKEN_TO_BE_REPLACED

People who use the ‘Founding Fathers’ to argue their case against racism and white supremacy are using a double edged sword. Those who wrote the Declaration of Independence and the Constitution were in great part white supremacist slave owners. As a matter of fact, they enshrined slavery in the Constitution itself.

END_OF_DOCUMENT_TOKEN_TO_BE_REPLACED

I was asked by an international radio to answer a few questions on my reflections on the European elections May 26. I thought I’d share a slightly modified version with you here.

END_OF_DOCUMENT_TOKEN_TO_BE_REPLACED

The United States must organize a Constitutional Congress and write a new, 21st Century, text to govern our nation. The further we go, the deeper the messes caused by a text written for the world of 1787. It would be a long process but I don’t think a few Amendments or Referendums will get the job done. However, there are things that could be done now.

END_OF_DOCUMENT_TOKEN_TO_BE_REPLACED

This is a timid attempt at starting a pod cast but it is a serious debate. My position that millionaire soccer players are whining hypocrits is sure to draw fire. It’s six minutes long. Please leave a comment.

END_OF_DOCUMENT_TOKEN_TO_BE_REPLACED

“A quarter of Europe’s inhabitants — more than half of them under the age of 30 — will be ‘Africans’ in 2050.” This is the startling conclusion Stephen Smith draws in his new book: La Ruée Vers l’Europe (The Rush for Europe). (1.)

The Professor of African Studies at Duke University has shaken France so deeply that President Emanuel Macron and National Front leader, Marine Le Pen, both referred to him in TV interviews in March.

END_OF_DOCUMENT_TOKEN_TO_BE_REPLACED

Some 300 leading French figures, from both the left and right, including three former Prime Ministers, have published a manifesto denouncing “the new anti-semitism” in the country which they attribute to the growth of radical Islam. The text, written by Philippe Val,  a former director of Charlie Hebdo, scolds politicians and the media for covering up the “Islamic” nature of this new anti-semitism and say there is “a low intensity ethnic cleansing” taking place in certain quarters of the country. The call to action comes with the publication of a book by fifteen intellectuals to denounce the “poison of anti-semitism.” (1)